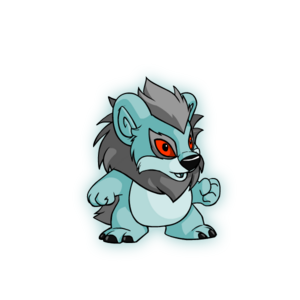 The Yurble is a furry Neopet that walks on two legs, although it seems to be capable of dropping onto all fours to run. It is easily recognised by its large, fluffy mane and its unusual curled-up ears, as well as the fuzzy patches around its eyes and its very large nose. It is a medium-sized Neopet.

Yurbles seem to be found all over Neopia. They are cheery creatures with large appetites, who like to tuck into all the tasty treats they can get their paws on. They also love the outdoors, and enjoy camping trips, explorations to new places, or just taking a healthy run through the grass and bushes.

The Yurble was introduced to the site on the 28th day of Hunting, Year Six (known outside Neopia as May 28th, 2004). They have stayed pretty much the same ever since their introduction, with only minor changes in artwork.