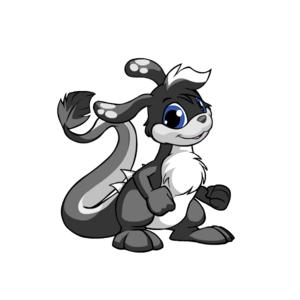 The Zafara is a furry pet which walks on its two large footpaws. Notable for its large floppy ears and long, powerful tail, it also has characteristic spiky ridges on its spine and fluffy fur on its fringe and chest. While some people think the Zafara looks like a kangaroo, it seems to move around by walking rather than hopping. It is a medium-sized Neopet.

Zafaras are known for their adventurous nature, and can be found just about everywhere in Neopia; they adapt well to many different habitats and do not have a specific homeland.

At an unknown point in time, Zafaras fought each other in a form of civil war that became known as the Zafara War.